A Rail Disaster That Shocked The Nation

OVER the years Gazette reporters and photographers have covered many stories of national importance . . . but none which have made quite as much impact as did the Charfield Rail Disaster of October 13th, 1928. Ironically the disaster coincided with the Gazette's Golden Jubilee celebrations.

First newspaper man on the scene of the disaster was the Gazette's editor/proprietor (now company chairman) Mr. F. G. Bailey. a skilled photographer whose exclusive pictures have recorded the event for posterity. Copies of his disaster pictures have been used by publications throughout the country. 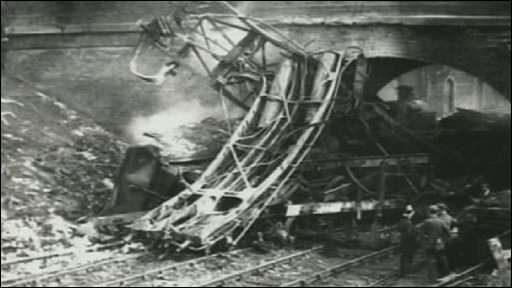 Although there have been far worse disasters, the Charfield rail crash and fire has continued to hold the public's imagination. The story has been told again and again and it has been the subject of television and radio programmes. There has also been a touch of mystery, with stories of a woman in black and two child victims who were never claimed or identified.

It was just fifty years ago that the arrival of a passenger train ten seconds early caused sixteen deaths in a horrific blaze that gutted coaches and their occupants. (This article was written 1978)

Passengers were travelling on the night mail train between Leeds and Bristol. It steamed at 60 miles per hour towards sleepy Charfield village as a 51 wagon goods train was shunting backwards into a siding. Just another ten seconds and the goods train would have been clear, but Lady Luck was looking away that night.

For some reason never fully explained or understood, the mail train roared past a signal at red and crashed into the goods train. Unfortunately the mailtrain was one of the older types still lit by gas (electricity was then taking over for trains illumination). and gas cylinders were hung beneath the front coaches. This gas ignited on impact, and the massed wreckage became a funeral pyre within seconds.

As the train hurtled towards Charfield through patchy fog, most of the passengers were asleep.

In the Charfield signal box, signalman Henry Button accepted the mail train from the Berkeley junction and put the signal to red. This should have halted the train until the goods train was off the line.

But Driver Henry Aldington and his fireman Frank Want read the distant signal as green, and continued on their fateful journey.

The engine and tender of the goods train were still on the line as the mail train hit them. Desperate efforts of the goods s train driver to clear the line were defeated by ten fateful seconds.

The mail train crashed into the goods tender, and ploughed off the line into another goods train - luckily empty - passing on the up line.

The mail train landed on its side among the smashed wagons, and hot ashes from the firebox spat over the line. Three coaches behind the engine telescoped falling against the brick bridge immediatley above the the line.

The impact was so great that passenger James Gaston was thrown through the roof of his compartment to land, seriously injured, on the bridge road. Minutes later he was found by villagers. He died in hospital.

The gas pipes fractured, and ashes from the firebox set the gas alight; the shattered coaches were turned into a horrendous funeral pyre.

Aroused by the noise of the crash, and the screaming of the dying and panic stricken passengers, villagers rushed down to the cutting. They found flames leaping from carriage to carriage, where passengers were trapped.

In a battle of time against the flames, villagers, railwaymen, and passengers who had escaped unscathed made frantic attempts to free those trapped in the wreckage.

'Some of the passengers were trapped by their arms and legs, and implored us to cut off their limbs to save them from the flames,' said Harry Long of Charfield.

Louis Huntley was returning to Penzance with this wife and widowed sister. He was in the second coach. 'I fell into a mass of struggling people. I told my wife to jump and she did, but my sister was trapped from the waist down and it was if she was held in a vice.

'I heard the cries of trapped women in the next compartment, and was able to free them.

'My sister was crying "please free me" and I stuck at it until the flames were only two or three feet away and I had to leave her to die . . .'

'I was knocked out by a blow on the jaw and cam to, to hear screams,' said Mr. Holman Brooke, who was accompanied by his intended fiancee, Hilda. 'I found myself lying on top of the wreckage crying out for Hilda but there was no answer. I crawled on my hand and knees along the top of the wreckage until some men brought me down by ladder.'

Within twenty minutes flames were leaping forty feet above the cutting. It took five hours before fire engines from Gloucester, Bristol and Stroud managed to get the flames under control.

But it was much later before anyone could face the grisly task of recovering the bodies.

The Railway Tavern, near the bridge, gas turned into a first-aid station More than thirty people were treated for minor injuries and 11 gravely injured people were rushed to Bristol Hospital.

Relatives came to Charfield to identity the bodies. The charred remains could only be identified, for the most part, by rings, watches, cigarette cases, and in on case a piece of distinctive shirt.

Only eight bodies had been identified at the inquest, four days latter Mr. H J Beale, solicitor for LMS, told the court, "There seems to be no detail missing to make this one of the most distressing cases for many years. Many passengers owe their lives to the energy and resolution of villagers other passengers, and of railway staff.

The charred remains of two children, one aged about five and the other between twelve and seventeen, were found. In spite of nationwide publicity, no one ever claimed the remains, and they were buried in a common grave at Charfield.

In the last few seconds preceding the crash, driver Harry Aldington bent helplessly over the controls. After the train the train overturned, he found himself up to his armpits in coal from the tender. He had survived the crash unhurt. He heard his fireman, Frank Want calling his name.

He dragged himself through a hole in the engine and began to help those trapped, until the flames made this impossible.

Then he made his way to the Charfield signalbox, where signalman Henry Button was gazing at the scene of carnage and destruction.

'What is the meaning of this lot?' shouted Aldington. 'You have the distant signal off.'

Aldington now faced the prospect of fighting to save his reputation, or living with the knowledge that he had caused the death of sixteen people.

For 37 years he had served the London, Midland and Scottish Railway well. For the past thirteen years he had been a driver with and impeccable record. Could he have mistaken a red light for a green on?

At the inquest a few days later, it became apparent that responsibility for the crash was being levelled at him.

Aldington explained to the Coroner they it was foggy in patches as he approached Charfield, and that he expected fogmen to be out. Want supported this view, which was confirmed by other drivers on the line at the time.

Want said that he had also seen the distant signal at green, and had said to the driver, right away, mate'.

But the signal man Button's records and timings showed that the distant signal had been red for danger, and that no fogmen had been required as he had been able to see the regulation distance.

The resumed inquest was held on October 31. After an absence of two hours, the jury returned to say, "We are satisfied to say that signalman Button was not at fault and that his signals and apparatus were in good working order. We are satisfied that in spite of conflicting evidence, about the fog, it was not necessary to call out the fog signalmen. Charfield Signal Box 'We are unanimously of the opinion that the collision was caused by the negligence of driver Aldington in passing the signals when at danger.'

Sir Seymour Williams, Coroner, said that he must interpret the verdict as one of manslaughter against Aldington, and committed him for trial on that charge, on bail.

However, when Aldington appeared at Gloucester Assize, the case did not proceed, and he was discharged.

The mystery of the two unclaimed children was resurrected in 1937, when a young woman from London claimed the bodies were those of her two young brothers. Strangely enough, her claim was never followed up.

From 1929 to the 1950's a mysterious woman in black was a regular visitor to the grave of the 'two unknown'.

The only person alive to have seen this woman is a former German prisoner of war, Joe Kloiber, who is reluctant to talk about the woman.

'The poor lady is at rest now I suppose,' he says, 'Why bring it up again? All I can tell you is that she was frail, always dressed in black, and came to the grave two or three times a year. The last time I saw her was sometime in the 1950's.

'She always arrived in a chauffeur-driven limousine, the car was not black, but I cannot remember what colour. She would put flowers on the grave and pray there.

'As far as I know, none ever spoke to her . She was elderly looking all those years ago, so I imagine she is dead now.'

Nothing was ever found of Goodwin Jenkins, a student who had written to his mother that he was coming home for the weekend.

In 1929, the Home Office consented to an inquest being held on him and for the first time under the new Coroners' Act an inquest was held without evidence of body. Mr. Mathias Nixon, a Halifax clerk, who had traveled in the same compartment as Jenkins as far as Birmingham, recognized him from a photograph; on this evidence, it was proved that Jenkins had died in the crash.