Sometime after my wife and I came to live here in Charfield I was happily working in my garden when I heard a sound which I last heard when I was a little lad back in Yorkshire! It was unmistakably the scream of the Merlin engine of a Spitfire. It brought back memories of the war time life, but to be honest we only had one bomb in my town which destroyed a pub and lowered the morale considerably. My father claimed that if they bombed the factory where he worked and which made "chucks" we would lose the war! I didn't know what "chucks" were (still not too sure) but I prayed nightly that Hitler didn't either! I discovered later that my father was rather prone to exaggeration. Anyway I digress! The plane flew low over Charfield, did a sort of an aerial maneuver and then dashed off! I have seen, and heard it, now and again since. I was intrigued at the sight and sound and I asked around! 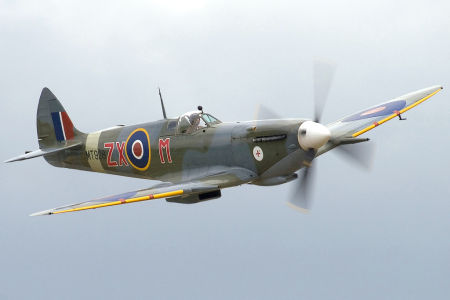 There were loads and loads of rumours about this plane. Some saying that it was rebuilt here in Charfield, that it was now a 2 seater, that it had crashed killing the pilot who was German. Others that it was rebuilt up in a barn at Church End, or Westerleigh, and a very unlikely one that it was restored on the very top floor of The Bone Mill!! I trawled through the internet, but I found no trace of the plane. I spoke to the Spitfire Society. I looked at the back copies of The Gazette, but absolutely nothing. At last I asked the right person, Steve at Steve's shop and he pointed me in the direction of a certain John Hart. I went to see John at his house in Charfield, and miracle of miracles I discovered the he was the project manager for the restoration of the Spitfire and he told me a tale that I want to share with you.

The original plane, a Spitfire Mark VIII HF, is the high altitude variant (up to 46,000 feet) and was built in 1944 and flown from the assembly factory in Southampton to Brise Norton by ATA girl, 19 year old Mary Wilkins (pic right), who had a license to fly 76 different types of planes! Wow!! She signed her name inside the plane.

By the time the plane got to Brise Norton and was test flown the European war was over but the war against Japan was still raging and so the plane was dismantled, boxed up, and sent to Australia. Then before the plane arrived that war was also over and it was not even test flown. The plane had a total flying time of 2 and a half hours and was subsequently sold for just 25 pounds to a private buyer, but he could never get an Australian permission to fly it! 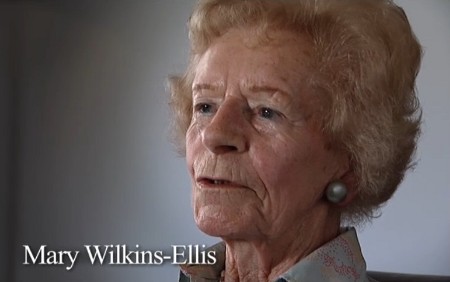 Move on 35 years and in 1979 Robert Lamplough heard of the plane and agreed a price. Robert was very well known in car racing circles and indeed had at one time no less than 82 racing cars. He had an RAF scholarship where he learnt to fly. This purchase however was at the time of a restriction in sending money overseas and he had to make up the price by also sending to Australia 7 Lotus cars, including 2 JPS (the Formula 1 variant). The plane was then boxed up and sent to England.

John Hart of Charfield was appointed chief project manager. John worked at Rolls Royce and his hobby was plane restoration. 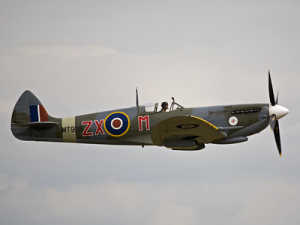 Now came the problem of where to restore it. It had to be a secret place because of the rarity and price of the parts needed. At that time there were criminals who would steal it if they could! It was left for a while at an air force base whilst a barn was being prepared at Westerleigh, but this deal fell through and attention was then focused upon the Bone Mill in Charfield which was bought for this purpose in late 1983, and then the building was prepared.

John and many others worked tirelessly for about 11 years replacing all the parts that had deteriorated over the 40 years since manufacture, including replacing all of the rivets and all of course at a very considerable cost. The wings alone needed 46,000 man hours work. The engine was past saving and so an original Merlin engine was acquired from a Swedish museum, never used, and was fitted to the plane. It is a Packard Merlin 266, rather than the British one, a supercharged Merlin 70.

When restoration was complete came the problem of slowly dismantling it, and gently moving the plane from the second floor to the waiting trucks outside. The wings were a particular problem and some of the supports in the mill had to be moved to get them through. Eventually the plane was taken to the Rolls Royce hangers in Bristol and reassembled. The plane took its "second" maiden flight in 1994.

It is now based at Rolls Royce in Bristol alongside another Spitfire and a Mustang. Quite often it flies in the skies above Charfield, the scream of its engine unmistakable, and it often dips its wings over the house of John Hart as if to say "Thanks".