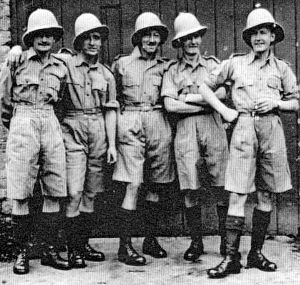 Trying out their Desert outfits ...

My husband was Willie (Bill) Wilcock of Thornhill near Dewsbury, West Yorkshire. Early in World War 2 he volunteered for the Armed Forces. He was an experienced driver, when such experience was fairly rare. Using some common sense, which was quite unusual for the Forces at that time, he was allocated to the 911 Company, Royal Army Service Corps, and became Driver Wilcock T150227 in January 1940.

As part of the 1st Armoured Division the Company went to France in May 1940 and was one of those half-forgotten 100,000 servicemen left behind in France after the evacuation from Dunkirk ended on 4 June 1940. After eventually leaving Brest in Brittany on 16 June 1940 and sailing to Plymouth, the Company spent the next months in various locations in southern England before arriving in Charfield on Wednesday 4 June 1941. Their barracks seemed to be in a brickworks or coal depot. On that day he wrote to me, his wife of two months.

To be honest he wasn't initially any more impressed with Charfield than he had been with any of the previous billets but he wrote that 'I am quite OK, and when we acclimatise ourselves things won't be too bad'. He wrote rather wearily to his brother on 13 July 1941 from the YMCA writing room whose windows 'looked out over the railway bridge and Charfield's only source of amusement', which turned out to be the passing of the Bristol to Bradford express train. He admitted that 'drinking was the only recreation and free for-all-fights take place every night now'. What the inhabitants of Charfield made of all this he did not say.

But there were other entertainments though. In the same letter he described how he and his fellow serviceman Edgar Horsfall from Bradford hired two bikes:

'Yesterday afternoon we set off over the Cotswolds to Stroud. I don't know if you've ever seen the Cotswolds, but I can tell you right now that if ever you think of cycling round this location just take the precaution of having a two stroke engine fitted , because I ain't never seen hills like 'em (and this from someone brought up in the Pennines). You sweat your way up one hill, sink back in the saddle and right in front of you the hills lay ranged out like clusters of sugar loaves. And then when you get to the top you look down into the valley below and get eyefuls of the most wonderful scenery any man has ever written poems about. In the foreground the River Severn traces patterns down to the Bristol Channel, over to the right in the far distance, you can just make out Weston Super Mare, and nearer the eye, Bath lies in a cluster of green hills. The whole scene is a literal poem of green. Then the clouds rolled in, blackened and opened. By the time we had found trees we were just soggy bundles of battledress. For half an hour it pelted down, straight through the leaves. We just crouched there and took it like London before the days of the night- fighter. We still had ten miles to Stroud and we rode that last ten miles like we were a bomb disposal squad and made a bee-line for the open-air baths. A swim put life back into us and we scoured the town for someplace to eat. We found a place that actually sold chipped potatoes and bacon! Potatoes – we haven't seen them in the Army for ten days now. For the past ten days our dinner has been two courses, stringlike meat and bread pudding. Our tea without a single exception has been two slices of bread and fish paste. Our breakfasts have consisted largely of tinned herrings. Well chums I must close. A cup of tea now and then back to the brickyard (Charfield).


In August 1941 I was able to get a week's holiday from my office job at Montague Burton's Tailors in Leeds. Bill managed to get a 48 hour pass and returned home to Dewsbury from Charfield to spend the weekend with me. We had arranged to travel back together to Charfield on Sunday, I would be in lodgings there for my week's holiday and we would spend Bill's off-duty time together.

On Sunday we went by train from Dewsbury to Leeds. A porter at Leeds City Station assured us that the carriage we were in was part of the train to Bristol. In those days trains often 'split' during the journey, and some carriages would be attached to a different steam engine before heading off to a different destination to the rest of the train. Some of the carriages in our train may well have been going to Bristol, but the porter had placed us in that part of the train which would be detached and head for London. When we discovered the mistake we got off the train at a station I don't know where, because all the station signs throughout the country had been removed. With time running out on Bill's 48 hour pass, we walked straight into the arms of the Military Police, who were always on the look-out at stations for 'deserters' and 'enemy agents'. There were no trains until Monday morning so we spent a miserable night on a station platform 'somewhere in England'. Bill was by now officially Absent Without Leave (AWOL). Sometime on Monday we arrived in Charfield. I went to find my lodgings and Bill reported back to his base at the brickworks. Because he had not reported back on time, and even though it was not his fault, he was put on a charge. The punishment was, in the circumstances, was one of the worst we could imagine: he was Confined to Barracks (CB) and could not leave the camp.

My lodgings for the week were in the cottage of a family called, as far as I remember, Monaghan, or something similar. There was a man, wife and two children. The cottage, as was usual then, had a toilet outside, no running water and in my bedroom was a large jug and washbowl. One night, being very thirsty, I took a long drink from a glass I had filled from the jug by the washbowl. Later, in daylight, I was horrified to see that the water in the jug was alive with tadpoles! But it didn't seem to do me any harm.

Because Bill was confined to barracks for the first few days of my holiday I could see him only by going to the gates of the brickworks and asking the sentry on duty if at least my husband could come to the other side of the gate. What I did see in the yard were large bucket shaped containers hung from overhead wires, evidently used to carry clay. Sometimes in these buckets I could see soldiers entertaining themselves by having a ride through the air. Towards the end of the week Bill's confined to barracks punishment expired and at last we were able to spend his off-duty time together. I remember that the hot sunny weather all that week left me 'as brown as a berry' and almost unrecognisable to my family when I got home.

There are few photographs of the time spent in Charfield. There were rumours about a move overseas and the issue of 'tropical kit' set everyone speculating. This photograph shows Bill (centre) and four of his pals posing in what was perhaps the first, and last, time they donned the full outfit. I do not know the exact location of the picture, it may have been Wickwar. 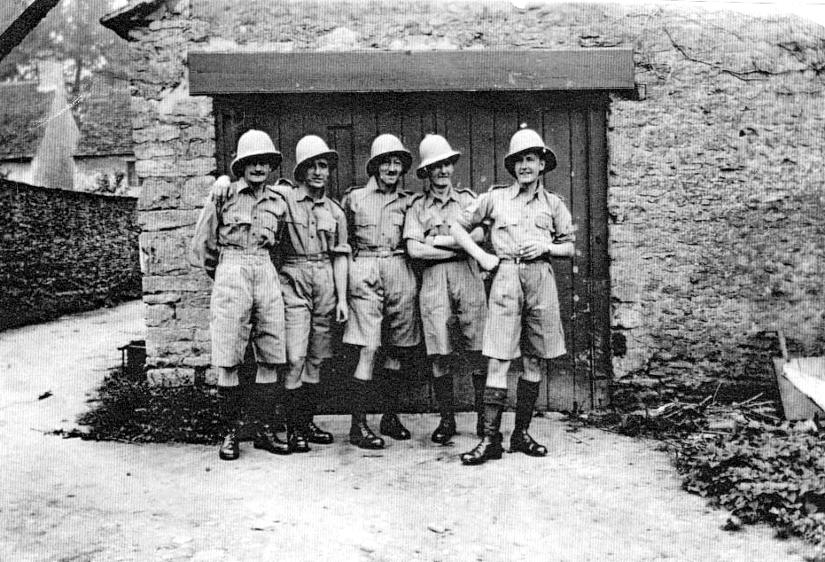 "The Big Five" trying out their Desert outfits in Wickwar prior to embarkation to the Middle East from the port of Liverpool, September 1941. Bill Wilcock, Dewsbury. Norman Swift, Sheffield and Edgar Horsfall Bradford.

In September 1941 911 Company posed for a group photograph. Again the location is not known, but the photograph is stamped on the back 'Basevi Malmesbury'. 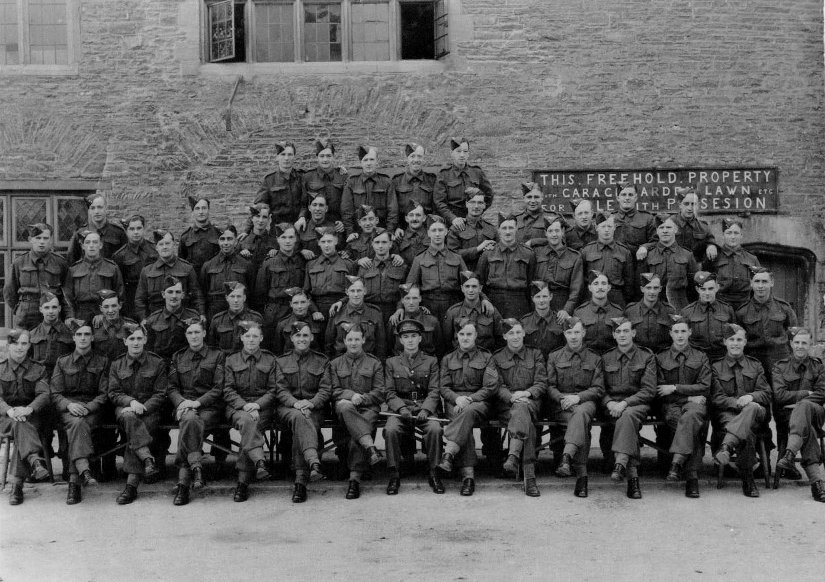 On 27 September 1941 my contact with Charfield ended when 911 Company was taken by train to Liverpool. They left there by sea in convoy for the Middle East and later took part in battles at El Alamein and elsewhere. I was not to see my husband again until October 1945.